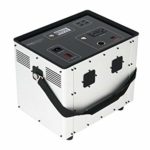 If you are trying to be more self-reliant in case of emergency, or just for your day to day, an excellent place to start is by investing in a fuelless solar generator. It can be pretty hard to know what to buy though, especially if you are unfamiliar with the technical wording that can sometimes be scattered throughout fuelless generator reviews. The best way to figure out what you want is to compare the different generators on the market, and you can find a detailed comparison chart here.

The short answer about the Humless 1500 series solar generator is that it is not enough for sustainable long term backup power. If you view the comparison chart above you’ll see it doesn’t have enough battery capacity or charge rate to be dependable.

Something like the Titan is much more reliable and dependable because of its power, capacity, expandability, and portability.

The following is a detailed and simplified explanation of the benefits and drawbacks of the Humless 1500 series solar generator.

The Humless 1500 uses a lithium-ion battery, which is the best kind of battery on the market as far as reliability, low maintenance, and durability go. Lithium batteries are more lightweight than lead-acid batteries, but the weight of the lithium depends on the quality of the lithium. So it may surprise you that the Humless 1500 is about the same weight as the Titan but almost one-quarter of the capacity. This means the Titan can handle four times as much power for almost the same weight. 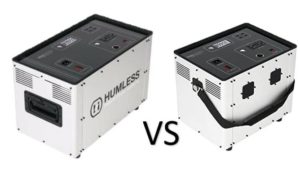 could be the lower capacity.

The most common Humless 1500 is the .64kwh version. This is definitely not enough battery capacity to handle longer power outages lasting a couple of days.

The battery capacity is a huge deal when you are buying a power station because you won’t always be able to be plugged into your solar panels. The time of day or if you are “on the go” will affect if you are able to recharge. If you are going to have an emergency backup generator, a bigger wattage capacity is typically better. The last thing you want in an emergency is to run out of power.

As far as battery size, the Humless 1500 at 1300wh is comparable to other great solar generators on the market. Just be aware of the smaller capacity battery available for this same model of Humless generator. The 640wh capacity is much too small for most people who want a solar generator.

In most fuelless solar generators, the inverter will have a continuous wattage output capacity of about half of its peak. However, the Humless 1500 isn’t quite like this. The Humless 1500 has an inverter continuous output of 1500 watts with a peak of only 1600

watts. With many other generators, they have the capacity to run at a peak for a short period of time. It is not exactly clear why this is but I believe it is a poor feature on the Humless. As a standard, the peak should be at least two times the continuous rating.

The Humless peaks at only 100 more watts than it can run on continuously, so running big appliances or power tools, maybe impossible. Just be aware of this as you are considering what you might need in an emergency situation or what you want to use your generator for in everyday use.

It is pure sine wave which is much better than modified sine wave.

In comparison to other solar generators on the market, the Humless 1500 has a pretty average to low solar input. The Humless 1500 will input up to 260 watts of solar power. The trickiest part of that is getting 260 watts in panels. It’s easy to get a single 260w solar panel but then the panel itself is very heavy and hard to move around. It’s easy to get two 100w or 120w solar panels but that still doesn’t add up to 260w total.

Humless makes a 130w monocrystalline foldable solar panel which is what they want people to buy to work with the Humless 1500. I personally dislike it when companies try to make people use their own panels. One big reason is that many people already have panels and so it makes it very difficult to purchase more panels when they already have some.

It uses common Anderson Powerpole plugs which are very easy to get MC4 adapters for so that any solar panel can be used. Keep in mind that the input voltage limit is 12v to 50v.

With the battery only being 640wh it will only take two to three hours to charge it up completely which is great. It’s only a fast-charging unit because the battery capacity is 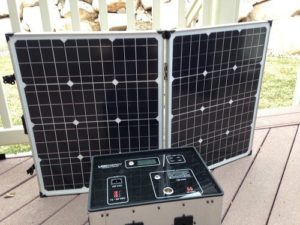 There are of course other factors to consider, like winter peak hours, where you are latitudinally, and if you have a lot of overcast days in your area. So a 5 hour charge time is manageable if you don’t depend on it every day. However, if you are using your generator every day and need it to be charged, you would benefit from getting one that has a higher maximum solar input and shorter charge time, like the Titan can be charged within 2 hours quite easily.

One feature that can be important if you want to take your solar generator on the go is if you can use a car charger. You cannot always use the sun, especially if you are driving and cannot set up your solar panels. In an emergency, this car charger can be very useful, especially if you are evacuating from a fire, hurricane, flood or whatever natural disaster. However, if you want to use your generator solely for home use, this feature might not be very important to you.

The Humless 1500 does not have a car charger. It is possible to work around this by using a 12v car inverter and just plug the AC wall charger into the inverter and then into the Humless.

The Humless 1500 is about average when it comes to the amount of outlets it has on the generator. Of course you can always use extension cords to connect other tools and appliances you want to run at the same time, but it is far more convenient to have a 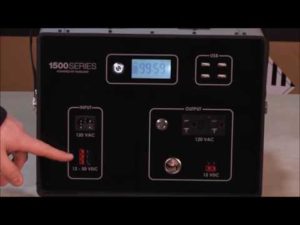 good amount of outlets on the actual generator itself. The Humless 1500 is equipped with two 110v standard outlets, one 12v car outlet, and four USB outlets.

One thing that the Humless 1500 does not have is an RV outlet, which would be invaluable to you if you have an RV. Also, the fact that it only has 640wh of battery capacity does not make it a very good option for RVers or VanLifers. Even if you don’t currently have an RV, you may want to invest in one in the future, if you are really serious about living or vacationing off the grid, so it could be convenient to have an outlet.

With technology products or any kind of big investment purchase, it is always nice to have a solid warranty. When it comes to technology, you never know if you have a lemon until you run it a few times. So a warranty is a really valuable thing to have when you are looking into generators. The Humless 1500 has a one year warranty, which should be enough time to figure out if there are any kinks in your system. That length of warranty is pretty standard for the generators on the market that actually have one.

One of the biggest drawbacks to the Humless 1500 is that it is absolutely not expandable. Some generators have the ability to expand their battery capacity to some additional external batteries. For example, the Titan can expand vertically with more lithium-ion batteries unlike any other generator on the market. This can be a huge benefit especially in emergencies or storms, where you may not be able to use your solar panels for an extended amount of time and will also be dependent solely on your generators.

This is also something to be especially wary of for the Humless 1500 since it is easy to mix up the Humless 1500 with the 1300 watt-hour battery and the same model name with the 640 watt-hour battery. If you were to purchase the smaller capacity battery, thinking that you won’t need too much wattage, and were to decide that you wanted to expand down the road, you wouldn’t be able to. There are other generators on the shop page that are expandable that you can check out.

One of the biggest benefits of the Humless 1500 is that it is rated to more lifecycles than any other solar generator on the market that uses Lithium-NMC batteries. It is rated to 2,500 cycles which is extremely high for a lithium-ion battery. I haven’t been able to get a clear answer as to how they got that rating but that’s what their user manual says.

2,500 cycles would equate to over 6 years of constant use before the battery reaches 80% efficiency which is very good.

You can see in these two short videos that visually the 1300wh and 640wh units look almost identical. This is what makes it so hard to identify which one is actually being viewed.

Sadly this isn’t a solar generator that I can recommend to people. The 1,300wh unit is very hard to find these days. It almost seems like Humless decided to do away with it which to me makes no sense since it was a great battery size. The 640wh version simply isn’t large enough to handle real power outages. It may be good for someone who is doing a lot of filming, flying drones or needs to recharge small items on the go.

I view it more as a battery power station than a portable solar generator. Humless makes other larger solar generators but they are not portable, they are meant for stationary situations.

Something like the Titan is definitely a better unit for real power outages. 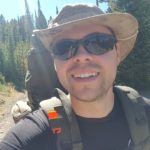