*This item is on backorder. Any new orders will begin shipping in Feb 2020

The Titan 1000 Rigid Kit is one of the best “go-to” options amongst all the kit options. The Titan 1000 Rigid is perfect for long term power outages often caused by hurricanes, winter storms, tornadoes, flooding and so on. It has the power to charge quickly in just 2 hours so that lots of equipment can be used throughout the day and have a full battery when the sun goes down.

This is the ideal kit for emergency preparedness because of how fast it charges. Since the large Titan battery is 2,000 watts and the solar panels are making 1,000 watts per hour it will charge in essentially 2 hours. Since there are 5 hours a day where 1,000 watts of power can be made from the panels per hour, this makes it very easy to run heavy equipment and still be charged up by the night. 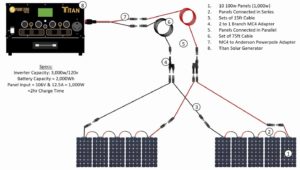 In this diagram, there is a series/parallel connection. This means that the panels are connected to each other in series of 5. There are 2 arrays of panels which are then connected in parallel. This makes it possible to make more power while keeping the volts and amps lower so that it is easy to make lots of power and plug into a single charging port on the Titan.