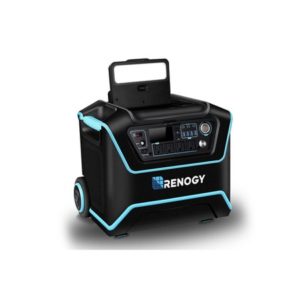 Searching for the best fuelless solar powered generators on the market can be a pretty daunting task, especially if you are new to researching generators. There are a surprising amount of options on the market and it can be very difficult to compare and contrast them. No two generators are exactly alike and they actually have very many differences to them, which makes figuring out the best generator for the price very difficult. I have put together a comparison chart that explains the pros and cons of several fuelless generators on the market currently, and that can be a great jumping off point for you.

If you are looking into the Renogy Lycan generator in particular, read on to get some more information.

One of the great benefits to the Renogy Lycan generators is that it has a lithium ion battery as opposed to a lead ion battery. This can impact a few different things, one of them being the weight of the entire unit. As batteries go, lead is one of the heavier ones, so if you’re looking to have a fuelless generator in your home or on the road with you, and you want it to be easily transportable, you should immediately strike the lead battery generators from your list. 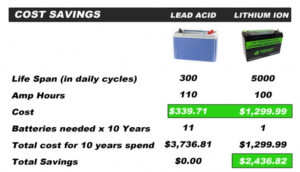 Lithium batteries also take little to no maintenance to ensure they run smoothly, while lead does require some care. If you are planning to live off grid or even just vacation of grid, having a battery that doesn’t need to be maintained over time is a very important feature. Though lithium batteries may be more expensive upfront, they are the more frugal choice in the long run because their lifecycle costs are among the cheapest options out there. You can plainly see that lithium is the best longterm choice, when you compare the Renogy Lycan’s lifecycles at 2000 versus the lead acid battery generators Nature Power 1800 and Goal Zero Yeti 1250 at 500 lifetime cycles each. Lithium ion batteries are just more efficient, lightweight, and longer lasting, which are all important aspects if you are trying to be self-reliant. The Renogy Lycan generator is just one of many different kinds of lithium ion battery run generators on the market right now.

The Renogy Lycan has a battery capacity of 1000 watts, which makes it competitive with some of the most efficient and best reviewed solar powered generators on the market. When you are looking at battery capacity, more is usually better. It is difficult to know exactly how much wattage you use in a given day if you don’t actively track it. So when you are in the market for a generator, you may want to take some steps to find out exactly how much you use. You can do this by getting your monthly utility bill and dividing it by 30. Of course, keep in mind that you don’t have to have under 1000 watts to make the Renogy Lycan useful, especially in emergencies, because you can recharge your battery at any point during the day. If you find that 1000 watts seems a bit low for what your needs are, there are other options available.

One of the few areas where the Renogy Lycan doesn’t quite shine is with the inverter. The inverter controls how much wattage the generator can expend at any one given time. So the continuous inverter rate for the Renogy Lycan is 600 watts, but it’s peak is 1200 watts. It is pretty standard that the peak would be double the output of what the inverter can handle continuously. When you compare these rates to those of similar fuelless solar powered generators on the market, you will find that it is a pretty low wattage. For example, the Kodiak can continuously run 1500 watts through the inverter with a peak of 3000 watts. This is more than double the capacity of the inverter for the Renogy Lycan. Of course, it all depends on what your needs may be for a power outage or for daily use, but there are other options with a higher inverter capacity on the shop page.

Another important feature for any solar generator that you want to use in case of emergency is how many outlets they have and what kind. The biggest thing you will be looking for in an emergency power outage is convenience. If you have a generator 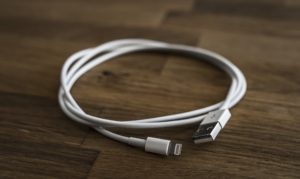 that you only have for a backup and you find that it has a limited amount of outlets, you might not be in a position to run to the store and grab extension cords etc. during an emergency.

The Renogy Lycan is about average to good when it comes to the amount of outlets it has in comparison to other similar generators. It has three standard 110v, one 12v car outlet, and four USB ports. This could very well be exactly what you need. Only a couple other generators have more outlets available than these that you can see on the shop page.

One outlet that the Renogy doesn’t have, that would be helpful is an RV outlet. If you go vacationing or plan to use your RV as an evacuation vehicle in case of an emergency, you definitely will want to invest in a solar powered generator that has this outlet. RV batteries aren’t typically meant to run continuously to heat the vehicle if you are out in the winter, and a backup generator can take a lot of the workload off of that in case you have nowhere to hook up.

Having a backup generator in case of emergency is great, but it’s important that you are prepared for every situation, and sometimes the generator’s battery won’t be enough. Some solar powered generators on the market aren’t expandable, meaning that you can’t have another backup source of power in case you need more energy than you can get from your generator’s battery and you are unable to recharge through your solar panels. In an emergency, you might be on the go and not able to set up your solar panels or you could be working in non peak solar hours. Anything could happen and it’s smart to be prepared for any situation.

The Renogy Lycan can be expanded in to one identical Lycan battery. So you can expand, but your options for expansion are limited to just one. Most of the generators on the market are similar to this set up or aren’t expandable at all, so this is pretty average. The Kodiak is one exception where you can expand it infinitely with 12v batteries. So the Renogy Lycan is up to par with most generators, but if you are looking for some extra battery capacity, there isone other option out there.

As before mentioned, if you are interested in solar generators as a form of energy in case of emergency, it is important to be as prepared as possible for emergency situations. One of these situations is an Electromagnetic pulse attack (EMP). These attacks are something that could be common in our near future as technology 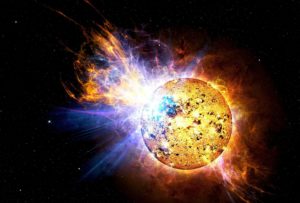 improves and expands throughout the world. One of these large scale attacks could wipe out the power to an entire country, but there is a way to protect your electronics from this. The Faraday Tech Protect bags have been tested time and time again against these simulated attacks and stood up against them. They come in many sizes and you can store a lot of equipment in there along with your generators. Anything with a microchip should be protected.

Obviously, these bags are more costly the larger they are, and one disadvantage of the Renogy Lycan is that it fits into the largest bag on the market. There are a few other generators that are much smaller and will fit into smaller bags that you can find on the shop page.

The absolute best solar generator we have found to date is the Titan. It far exceeds all expectations and is much more powerful than the Renogy Lycan. You can find more information on it here.

Have you looked into a lot of solar generators or are you in the beginning of your search? If you need help comparing the options, check out this video or contact me for more information.

How Does A Solar Generator Work?

Get the coolest tips and tricks today

This newsletter will change everything you ever thought about portable solar. Find the secret to living off the grid.